The AmazonBasics brand has made a name for itself when it comes to accessories such as charging cables, batteries, laptop stands, HDMI cables, and more. One can also expect a certain level of quality and durability of these products. Recently, Amazon launched the AmazonBasics TVs in 32, 43, 50, and 55-inch screen sizes. The 32-inch TV is an HD-ready TV, while the 43-inch variant is available in FHD and 4K options. The 50 and 55-inch variants are available in 4K with support for HDR, HDR 10+, and Dolby Vision. Priced at Rs 39,999, the 55-inch AmazonBasics TV competes with the likes of the Mi TV 4X, Hisense 55A71F (review), and the Realme SLED TV (review), to name a few. The TV’s biggest USP is that it runs on the Fire TV UI found on the Fire TV stick. Is it a worthy contender to consider?

Kicking things off with the display, the AmazonBasics Fire TV Edition TV has an IPS panel which means you can expect good viewing angles with some compromise to the black levels. However, if there is some biased lighting in the room, the blacks look quite alright. It is a 4K panel with support for HDR 10, HDR 10+, and Dolby Vision. We do not know the panel’s maximum brightness, but we peg it to be in the ballpark of 350 nits. It also does not appear to have any dimming zones. Based on the content played (HDR, SDR, or Dolby Vision), there is a healthy mix of picture presets to choose from, which we will discuss in the following sections. Let’s take a look at the picture performance of this TV in detail.

As we’ve mentioned above, the AmazonBasics 55-inch 4K TV supports all popular HDR formats – HDR 10, HDR 10+ and Dolby Vision. There is a decent catalog of HDR content available via streaming services such as Netflix, Prime Video, and Disney+ Hotstar In India. 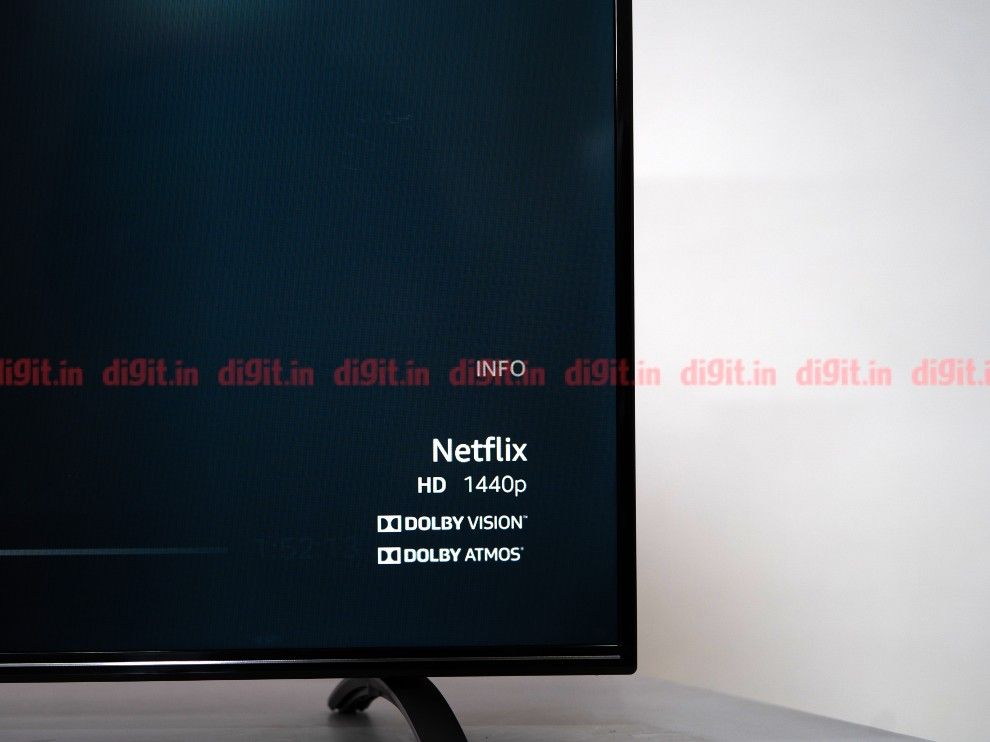 Let’s start with Dolby Vision content. Playing content like Our Planet and Altered Carbon on Netflix was quite a pleasant experience. Even in some of the darker sequences, the content was still visible on the screen. In bright sequences in some of the content, you can view the details in the bright highlights before it clips or appears burnt, and while this threshold is relatively low on all budget TVs, it’s not something we can complain about, as you will only notice it when you know what you are looking for. Content in Dolby Vision from Netflix looks good with rich colors. 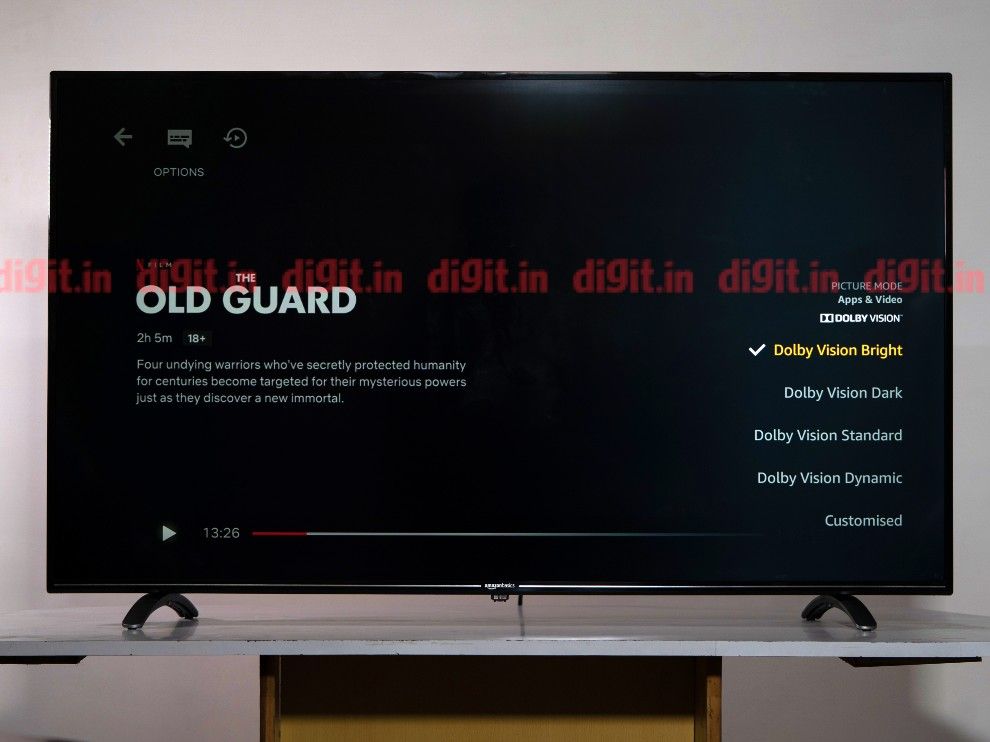 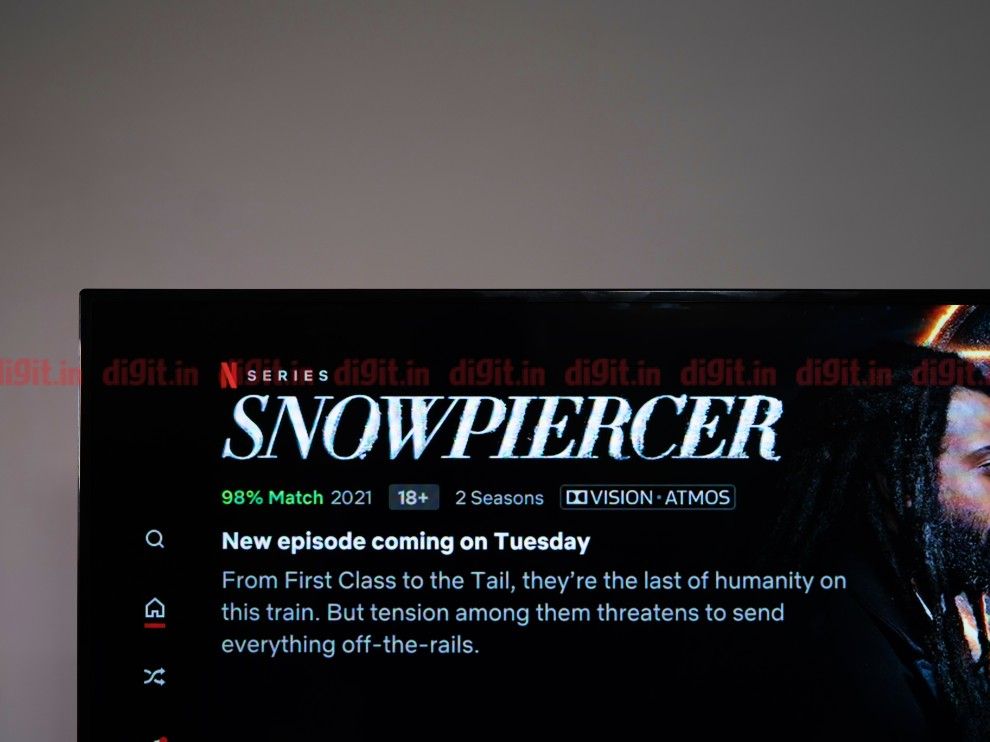 Moving over to HDR content, and this is where things get a little confusing. Consuming HDR content on YouTube works fine with content looking lush, especially movie trailers and the demo clips used to showcase the capability of a TV. However, it’s with HDR 10+ content on Prime Video that we saw a few misses. A show like The Boys Season 2 Episode 8 towards the end, where we have a lot of bright lightning and some good shadows in the forest, it’s a fun watch on this TV. But a show like Jack Ryan Season 2 Episode 2 and the Grand Tour Season 1 Episode 1 had a slight green bias. We saw the same content on a laptop (MacBook Air) and an LG B9 OLED TV, and while the green bias was there as a part of the color pallet, it was a bit more pronounced on the AmazonBasics TV. Changing the picture presets didn’t help in this case. The sequence in the Grand Tour Season 1 Episode 1 has all the cars driving across the desert; the desert has a green tint to it which looks a little unnatural. 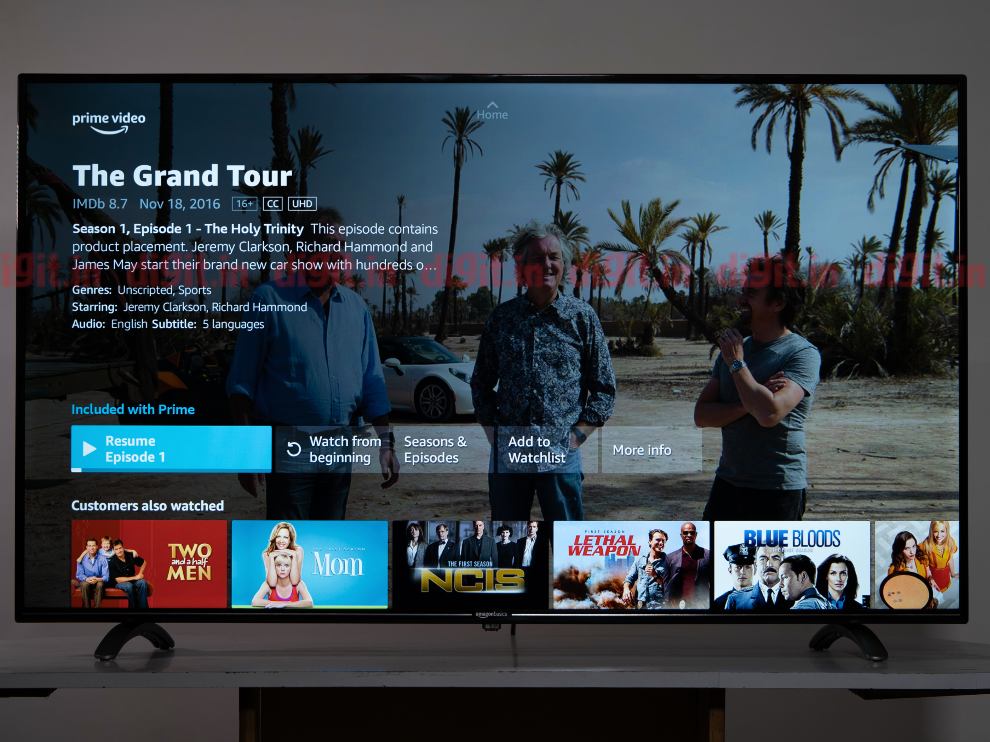 With HDR 10 content, we have picture presets like Bright and Dark, which, just like the Dolby Vision presets, increases and decreases the brightness and backlighting. You can change these settings based on the room’s lighting and how grey the blacks look to you when consuming content.

When it comes to 4K HDR content, AmazonBasics TV’s performance is at par with what the competition is offering, and that’s not a bad thing. We have seen a slew of homogenous performing TVs, and having one more means consumers have more options to choose from. 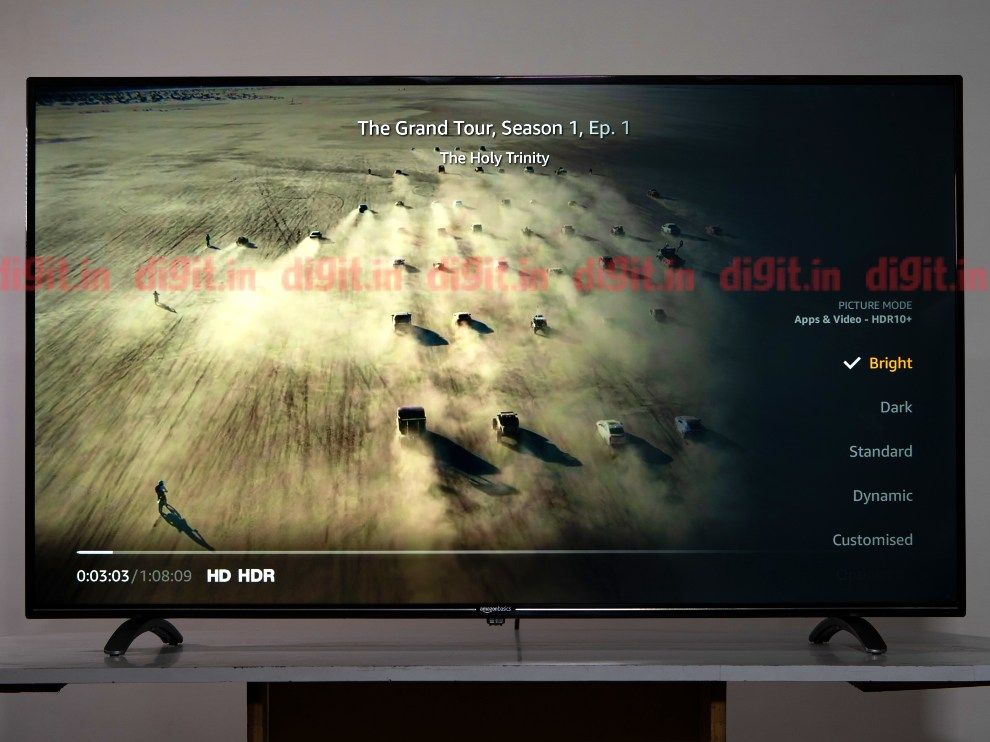 We played a lot of FHD content on the TV like Young Sheldon, Mission: Impossible, Spider-Man Homecoming, some trailers and clips from YouTube, and more. A show like Young Sheldon has a vibrant color pallet, and it looks good on this TV. Even Spider-Man’s suit has the punchy blue and red you’d expect. There are some night sequences where the content can get a little muddy, but nothing that’s out of the ordinary for this price segment. 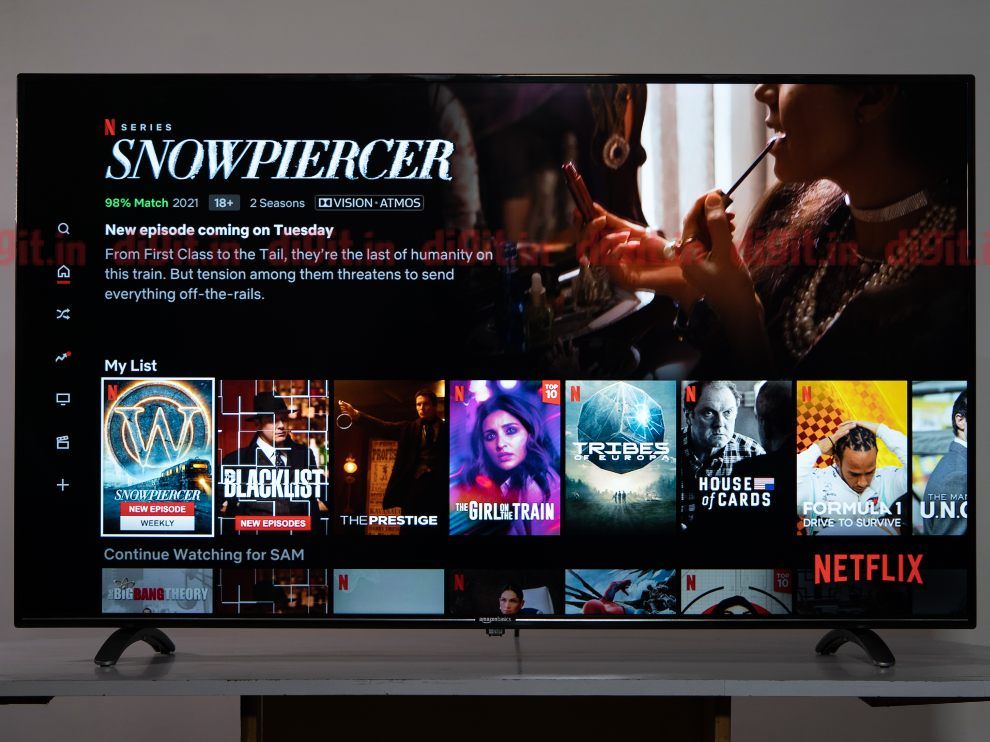 I would recommend sticking with “Standard”, and “Movie” from all the presets on offer for SDR content. Be it for watching regular TV shows or Movies or even content on YouTube. For me, Dynamic made the content look slightly overexposed in some situations, and I don’t recommend that preset, especially for movies.

We played our standard slew of games from the Xbox One X, including Assassin’s Creed: Valhalla (review), Forza Horizon, and Gears 5 (review). The TV doesn’t have a “Game Mode” in its picture presets and resorts to the standard HDR presets found when consuming HDR content from the built-in apps. The lack of a “game mode” would mean that the input lag is relatively high. While we don’t know the exact input lag on this TV, we can tell you that if you play games like Call of Duty competitively online, this TV isn’t for you. Even in an action-packed single-player game like Gears 5, there was a hair’s delay when commanding an action and its execution on screen. While this shouldn’t affect those looking to play single-player games or couch co-op, it will hinder your performance in the online arena. 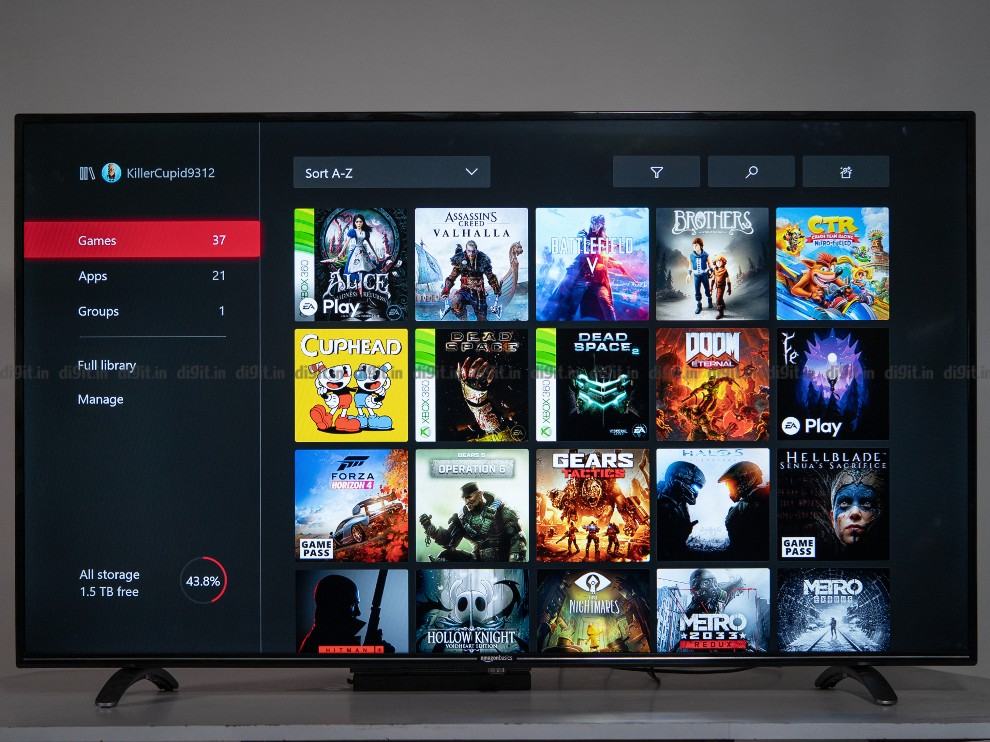 As for visuals, the HDR bright settings were the best for a good visual experience. A game like Gears 5 has lush environments, and it shows on this TV. Forza Horizon, on the other hand, looked a tad dimmer than I’d like. In some TVs like the Mi TV 4X, you can change the HDMI input from HDMI 2.0 to HDMI 1.4, ensuring the console is outputting in SDR. On the Mi TV, this means we got a slightly brighter image in SDR. In the case of the Amazon Basics TV, we can switch from HDMI 2.0 to 1.4 in the settings, but changing this had no noticeable impact on the gaming performance. Needless to say, if gaming is a priority, there are other TVs to choose from. 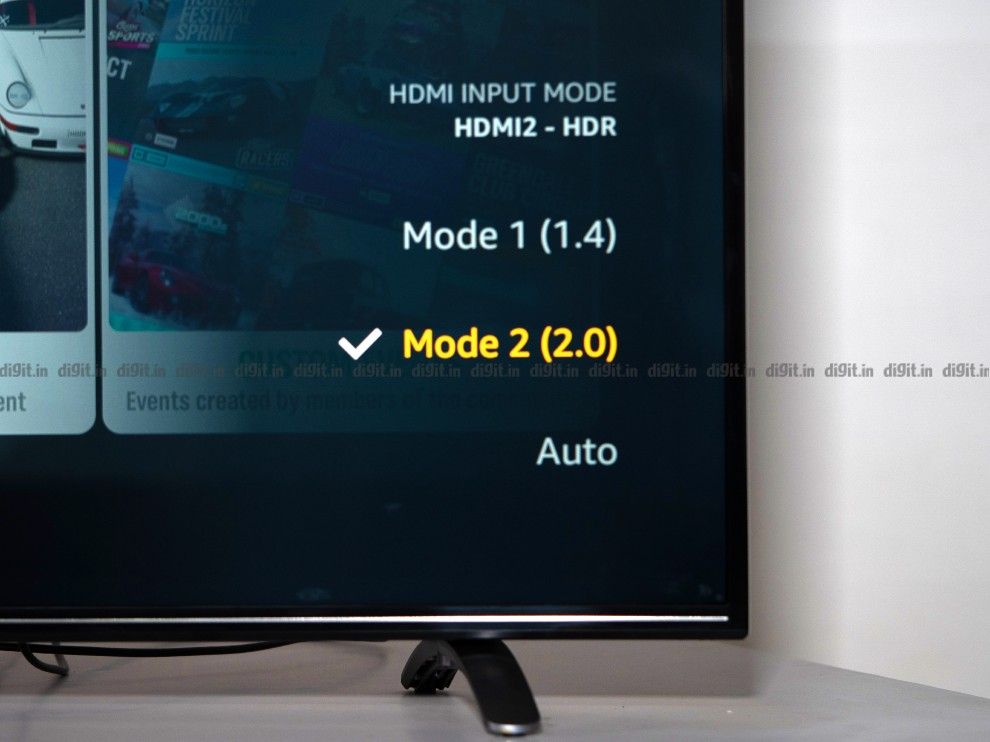 The AmazonBasics TV has 20W of sound output and is enough to fill the average living room with sound. The speakers do a decent job in content like news and TV shows, and one can even enjoy a movie or 2. But for complex action sequences with background score, onscreen action, and dialogue, the speakers left me wanting more. The audio performance from the Hisense 55A71F was better than the AmazonBasics TV.

On AmazonBasics TV, you can enjoy the sound of breaking ice in a movie like Togo, just don’t expect to really ‘feel’ it. 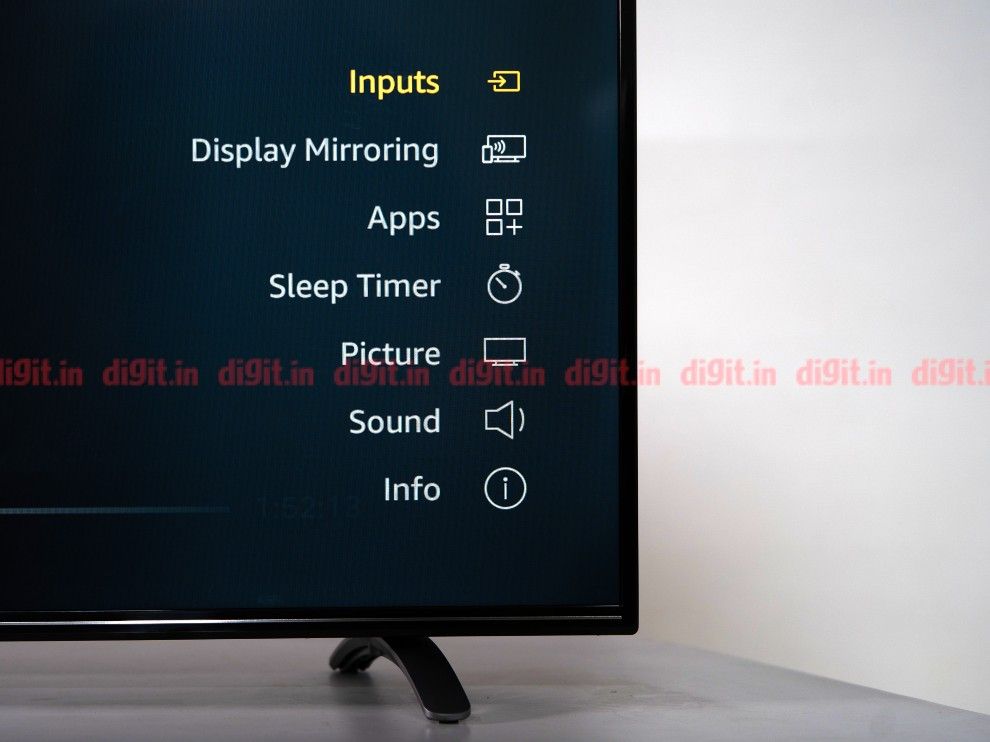 The AmazonBasics TV is running on the Fire TV OS, and it is identical to the one on the Fire TV Stick, with the addition of source selection and picture settings. You can switch HDMI sources as well using Alexa on this TV which is pretty cool. 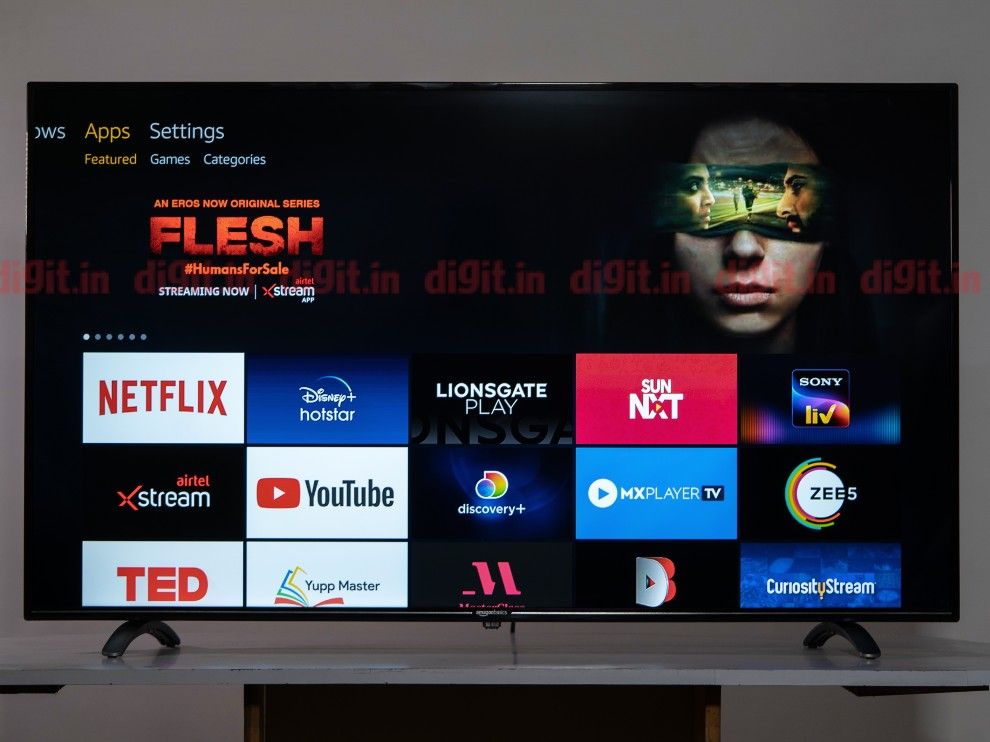 The UI is as smooth as we have seen on the Fire TV Stick, and the UI supports all the popular streaming services available, including Apple TV. So, if you have a library of movies on your Apple TV account or would like to stream Apple TV Plus shows, you can do so from the comfort of this TV. This is not an app most budget 55-inch TVs support, so it is a thing to consider if you are invested in Apple’s streaming service. Overall, the UI barely lagged, making me feel like a Fire TV stick was connected to the TV. Alexa also works like a charm. From saying things like “Play Stranger Things on Netflix” to “play Mandalorian on Hotstar” and even switching HDMI sources, it obeyed my commands with ease. 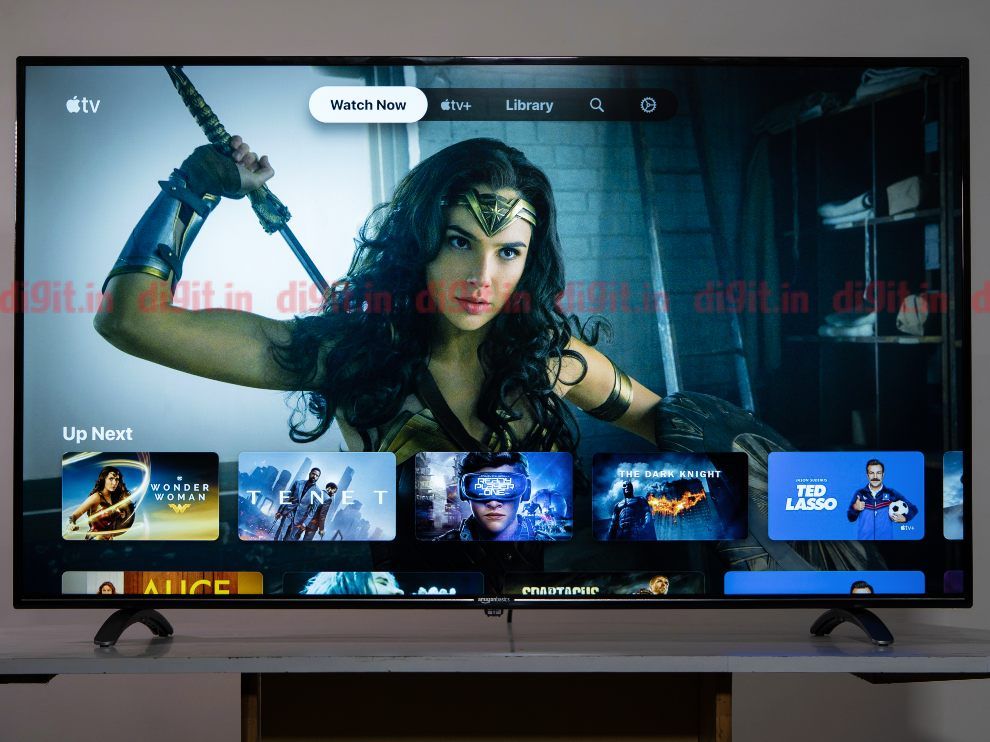 With the launch of the third-generation Fire TV Stick (review), we have seen the new Fire TV UI, and we hope it makes its way to this TV soon. Overall, the Fire TV UI is more fluid than what we have seen on some budget Android TVs and has the potential to give the likes of Xiaomi’s PatchWall and OnePlus Oxygen Play a run for its money.

The remote control on the AmazonBasics Fire TV is identical to the one we saw on the 43-inch Akai TV, and if the branding was removed from the two remote controls, they’d be identical twins. The remote control is ergonomic, and just like the Fire TV remote control has all the buttons neatly laid out. We have dedicated hotkeys for Prime Video, Netflix, Amazon Music, and a dedicated button to bring up your apps. The playback controls, menu options, and more are the same as the Akai TV (review) and even the Onida Fire TV (review), so there are no complaints there. 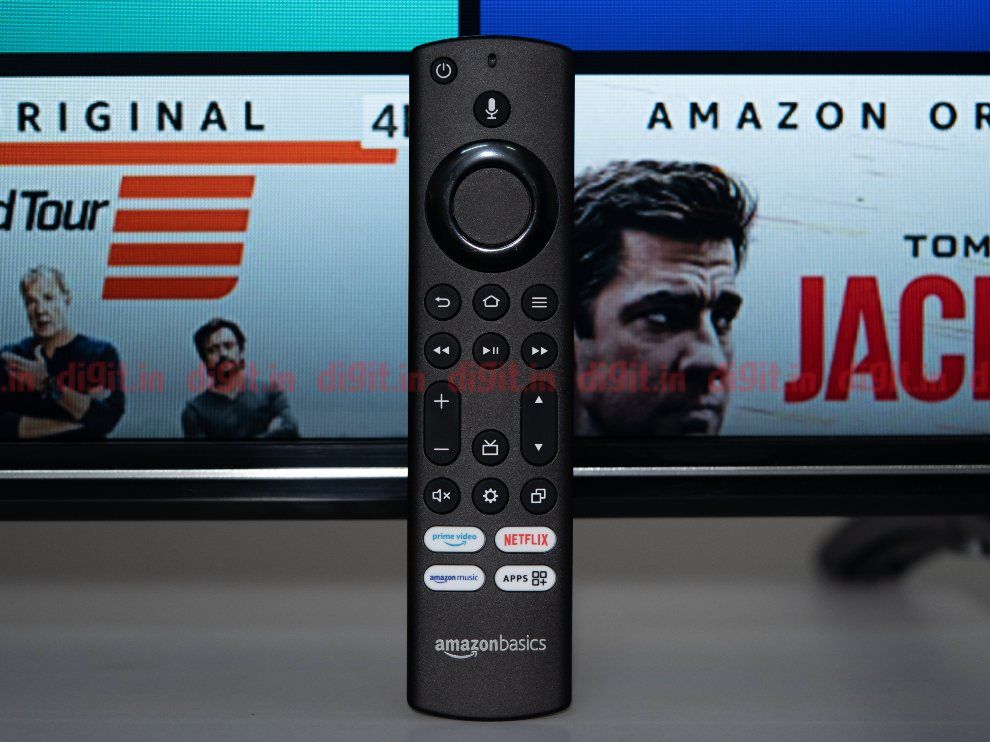 Coming to the AmazonBasics TV build, the display has relatively slim bezels all around, and two metal feet hold the TV in place when kept on a tabletop. The feet have a slightly circular arch design which is a departure from the sharp angular feet we have seen on other TVs like the realme SLED TV (review) or even the OnePlus U1 (review). The feet are wide, but the TV isn’t tall enough to let you keep the OG PS4 or Xbox One below it. You may be able to fit a set-top box below it. 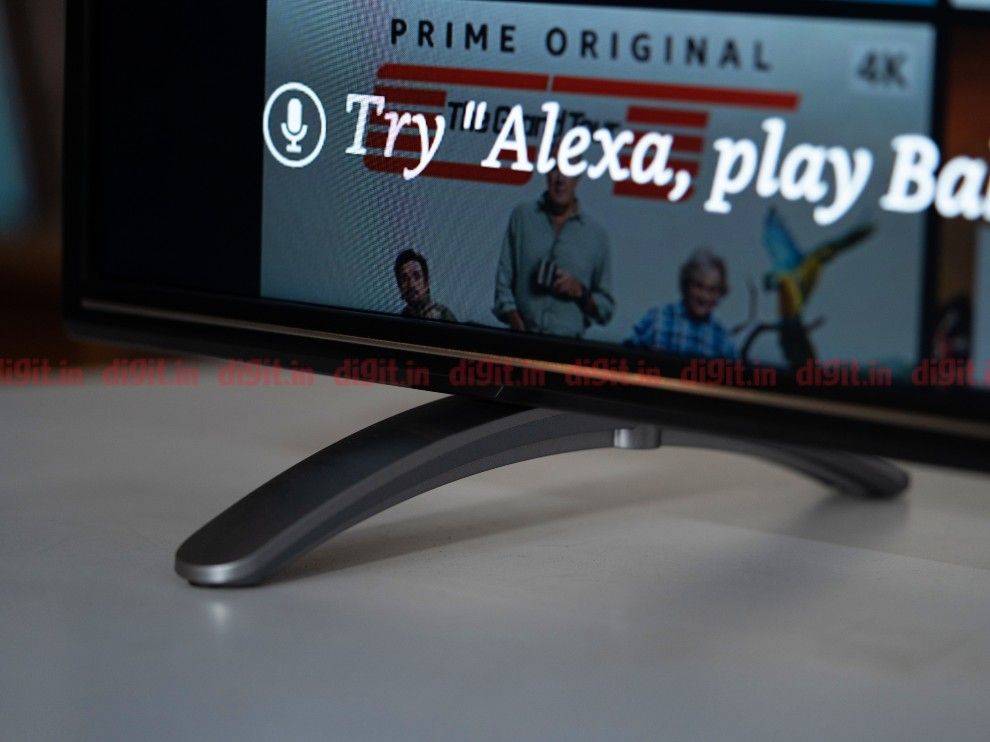 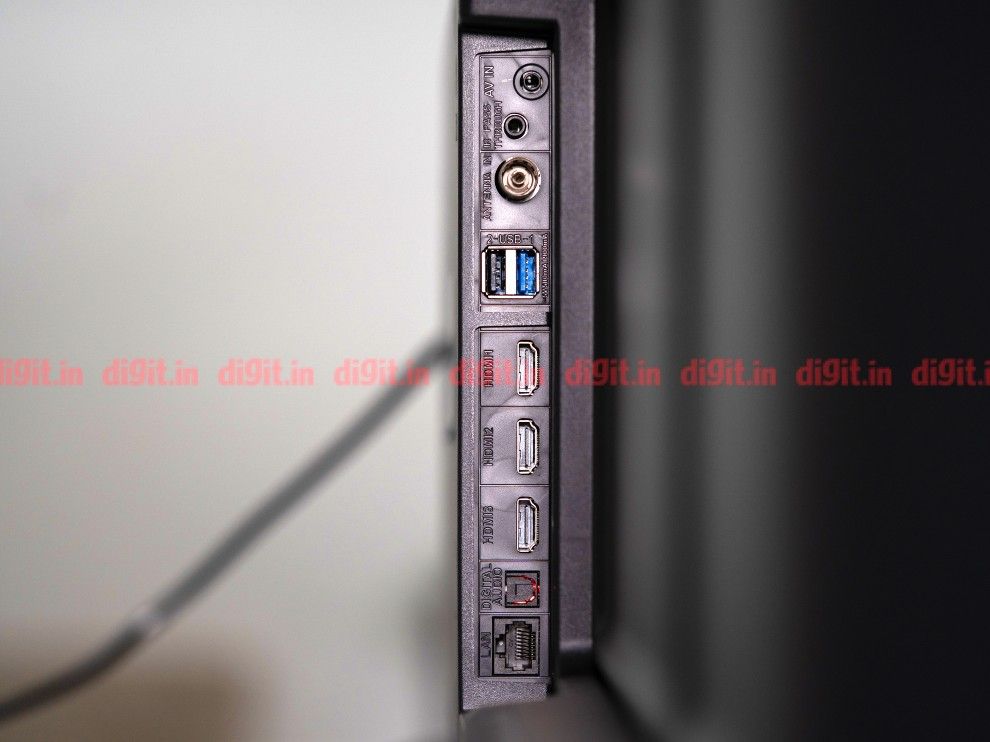 The AmazonBasics Fire TV edition TV is priced competitively when looking at the 55-inch budget TV space. The most significant advantage this TV has over its competition is the UI. We have seen Android TVs in the budget space lag with some heavy multitasking, and while the AmazonBasics TV isn’t perfect, its UI brings a bit more fluidity than some of the competition. The TV’s picture quality is acceptable and at par with what the competition offers in this price segment. However, the audio left us wanting more. There is some input lag when gaming on this TV, making it hard to recommend for gamers who want to play competitive games. But for the casual gamer, this TV should work just fine. We haven’t reviewed all the budget 55-inch TVs out there, but from the ones we have, we can safely recommend AmazonBasics TV as a contender for those looking for a budget smart TV for their movies and TV show needs. It’s also the only 55-inch TV at this price that we’ve tested that supports the Apple TV app.